By Ed Odeven
TOKYO (Nov. 7, 2013) — It was several weeks ago — on Sept. 25, to be precise — when I attended a breakfast event featuring Pulitzer Prize-winning journalist Carl Bernstein, who teamed up with Bob Woodward, his Washington Post colleague, to report the shocking details of the Watergate scandal, starting in 1972.

With time to reflect on that memorable morning, held in Boca Raton, Florida, I’m grateful to say I was able to hear the legendary journalist’s thoughts on the current state of American democracy, the legacy of his work with Woodward, traditional media, contemporary media, social media and, of course, memories of Watergate. In short, it was an unforgettable march through history through Bernstein’s words.

It was a mesmerizing two-hour stay at Renaissance Boca Raton Hotel at an event attended by about 100 individuals, including a few fellow journalists who scribbled down notes hurriedly as Woodward spoke. (The event, dubbed “A Conversation With Carl Bernstein,” was sponsored by the Jewish Journal.)

Jennifer Jhon, the Sun-Sentinel’s Next Generation Coordinator who has had a variety of roles at the South Florida newspaper over the past decade, served as the event moderator and gave Bernstein ample time to pontificate and give context to his responses.

Bernstein recognized the value journalism has in educating the public about important issues, and he said: “Reporting is the best obtainable version of the truth.”

Bernstein has been a longtime critic of government ineptitude and problems with an increasingly polarized citizenry.

In one of his opening remarks, less than 5 minutes into the event, he reminded the assembled crowd that the political system has broken down. He pointed to Congress as dysfunctional. “One of three branches of government doesn’t work,” he stated.

Increasingly over the past few decades, he said, the United States has become besieged by an “ideological, cultural warfare.”

Media plays a big role in this problem, Bernstein offered, and said that as time marches on most people do not seek out differing viewpoints, don’t make a concerted effort to read/hear/see viewpoints that might challenge their worldview or opinions on important societal issues.

Instead, he said, “people are looking for ways to buttress what they believe.” And, as a result, “a large percentage (of them) are not interested in being open-minded.”

This, he pointed out, is fueled by the partisan-driven news coverage on Fox, CNN, MSNBC, among other media outlets.

And with the concentration of wealth at the top and the divide between the very rich and very poor expanding over the past four decades, “I think that the greatest issue is we’re coming closer to a plutocracy,” he said.

Bernstein has fond memories of his work as a staff writer for The Washington Post and the support he received from longtime publisher Katharine Graham during the tumultuous times when President Richard Nixon’s White House mounted a sustained campaign against political enemies, real and perceived.

Woodward and Bernstein didn’t just meet Graham at a cocktail party or a Christmas function for the newsroom. Instead, while their work on the Watergate scandal reporting kept them in the spotlight for months, “Bob Woodward and I had great interaction with our publisher,” he recalled in Florida.

Regarding Watergate, “we had 15-20 conversations,” added Bernstein.

Graham’s support for the two reporters was “very rare,” he went on. He remembered her asking, “Are we doing all we can to support your reporting?”

The dozens of stories that Woodward and Bernstein worked on together, followed a book, “All The President’s Men,” which became a 1976 movie with the same name (starring Robert Redford and Dustin Hoffman). They also teamed up to write “The Final Days” about the Nixon presidency, which ended in August 1974 in disgrace — with the president’s resignation.

Bernstein, of course, has talked about Watergate on countless occasions.

A few choice words succinctly sum up what it was all about: “a conspiracy of political espionage and sabotage.”

Asked during the breakfast if he would’ve done anything differently in his work on this once-in-a-lifetime assignment, Bernstein blurted out, “Yeah,  maybe not,” with a laugh.

At the time of the Watergate scandal, it didn’t hurt that Woodward and Bernstein were ambitious, energetic and young.

No one said filing a series of stories that connected Nixon and high-ranking members of his administration to criminal activities would be easy for any journalist, not even one named Clark Kent.

“We were afraid of making mistakes,” Bernstein admits now.

Recalling the ruthless commitment to undermining American democracy employed by Nixon and his henchmen, Bernstein described his many dealings (and learning about) with government and Nixon officials as having  an “air of intimidation.”

These were “crazy people,” he said.

So what was the lesson of Watergate? What happened in Watergate?

“The system worked,” he said, citing the Supreme Court ordered Nixon to turn over his audio tapes as evidence in the investigation.

Unlike some pundits, or reactionaries, who’ll blast the arrival of Al Jazeera America as a media outlet in the United States, Bernstein welcomes the opportunity to learn more about the Middle East and the Arab world on the new English-language network in the U.S.

It’s a “really interesting phenomenon,” he told the crowd. “I’m glad it’s here.” Having greater access to a “reporting organization based in the Arab world is a really good thing.”

One attendee suggested to Bernstein that the media has too much power and not oversight, so therefore shouldn’t government have more power, more control over the media.

“We don’t need police in media” was his response, citing the First Amendment. And then he said, “I’m weary of generalizations.”

Another individual in the conference room asked Bernstein if the media’s Watergate coverage proved that it had an ideological bias against Nixon and an agenda to get him booted from the White House.

“That’s an ideological interpretation (of history),” Bernstein said. “As if Nixon was a victim.”

He summed up his argument this way: “Listen to the (Nixon) tapes.”

The tapes, Bernstein argued, proved that the Nixon presidency wasn’t about “what was good for the country, (but) what we can do to screw our enemies.”

Bernstein presented facts, spoke eloquently and paused to careful outline his next ideas, then delivered them in equal parts measured and rapid-fire dialogue.

He also spoke about the usefulness of social media — including Twitter and Facebook — to augment traditional reporting, but said the closing of foreign news bureaus (print and broadcast) has been a loss for the public, which doesn’t received the same depth to coverage that it once did.

He praised the overall quality of The New York Times, calling it a great newspaper and a shining example of modern journalism.

Moments later, he described The Washington Post as “a shell of its former shelf.”

But he admitted that he’s “very hopeful” new Post owner Jeff Bezos, the Amazon founder and billionaire, can provide a positive boost for the iconic newspaper. During the Internet age, traditional print media companies are still trying to figure out how to be profitable, and someone whose company has been so successful on the Internet can offer some good ideas, Bernstein suggested.

The big three or four networks, he said, are making “unbelievable amounts of money. But they are totally unwilling to use profits for news divisions.” 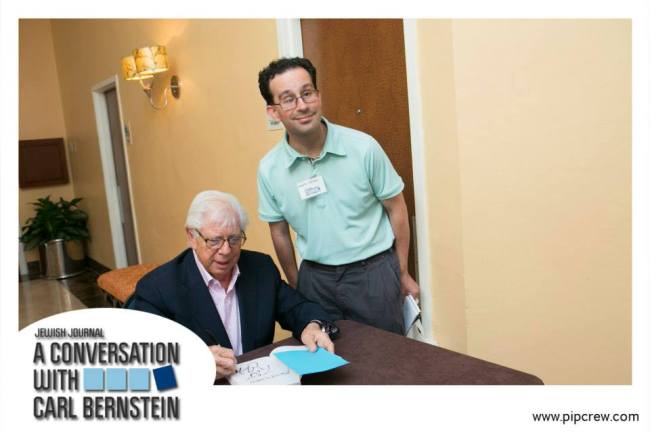 The legendary Carl Bernstein poses for a picture with Ed Odeven during the book-signing session in Boca Raton, Florida.

One thought on “Carl Bernstein speaks”